This year we’ve seen more electric bikes than ever on our adult only caravan sites and campsites. It’s no wonder this new type of bicycle has become so popular because it takes a lot of the hard work out of cycling. Whether you’re travelling in a motorhome or with a caravan, this nifty mode of transport can really come in handy.

Our sponsor, PJ Outdoors, has some great deals on e-bikes. So we asked them what’s on offer and what to take into consideration when buying one. (They generously donated an e-bike for the Prize Draw we recently held at the National Motorhome and Caravan Show at the NEC.)

Contrary to some preconceptions, electric bikes do not do all the work (they’re not the same as electric mopeds), so you needn’t feel lazy for getting one! The frame, wheels and saddle are just the same as for a normal bike. And you have to pedal to make it go, as you would with a normal bike.

The difference is that an e-bike will assist your pedalling, which means you can go further, faster and for longer. In fact, the correct name is ‘electrically assisted bike’. A small engine engages as you start pedalling and this helps you to accelerate, maintain a steady speed, cover rough surfaces and, of course, get up hills!

If you’re environmentally minded and keen to reduce your use of fossil fuels, e-bikes certainly help. They consume a relatively small amount of electrical energy, providing a green alternative to petrol and diesel powered vehicles. Plus they’re much easier to park!

To charge an e-bike, you simply remove the battery pack from the bike, connect the charger that comes with the bike and plug it into a mains outlet. It can take between two and six hours to charge the battery, depending on the type and size of bike.

Using e-bikes to get around when you’re away or at home can actually save money. Compared to taxis, public transport and parking charges, the cost of running them is very low.

Here are some of the key factors that will help you choose the right bike: 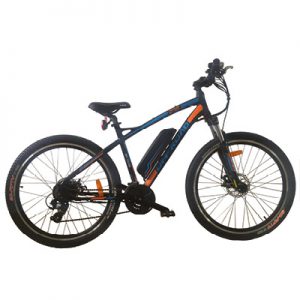 You can usually go between 30 and 40 miles on a single charge, depending on the bike and terrain. If the battery runs out before you get back, the bike will still work – you’ll just have to rely solely on your own pedal power! To avoid draining the battery, some bikes have a ‘Park’ function which automatically switches the bike off after 10 minutes.

In terms of weight, a smaller bike with 20 inch wheels will typically support up to 120 kg (19 stone) and weigh around 25 kg (55 lbs). A lightweight bike could be  just 22 kg and come with its own wheelie carry bag.

As you’d expect, the electrically assisted mountain bikes with their larger wheels and bigger frames are heavier, weighing in at more than 28 kg (62 lbs). They also have 20+ gears and you can expect around five assistance levels, along with top quality front and back brakes, a speedometer and daily distance display.

You’ll find around three to seven gears on the smaller bikes. There will be different speeds or assistance levels as well, with some models going up to 25 km per hour (15.5 mph). Some bikes also have a ‘walk mode’ so that your bike will power itself along if you’re pushing it over uneven ground or up a hill.

The amount of Watts used by these motors varies from 150 to 250 or more. However, comparing batteries can be tricky. The charge capacity is measured in Amp Hours, but be aware that Amp Hours are not always calculated the same way.

How much do they cost?

Cost is, of course, another key consideration. Prices for the PJ Outdoors range start at just under £700 for a small foldaway bike with 20″ wheels. The mountain bike model is the most expensive and will set you back just under £1,200.

You might also need to think about insurance cover – not only to protect against theft of or damage to the bike, but also to ensure you’re covered in case of an accident.

Charging the batteries while you’re away

You may be wondering about the fact that some of our caravan, camping and touring sites only have 10 amp hook-ups.  Or you might not use hook-ups at all and rely on your own vehicle power or solar power.  The good news it that you should be able to charge electric bikes without a problem as the bikes’ chargers only draw a small amount of electricity.

See the range of e-bikes at PJ Outdoors