Grooby’s Pit is a quiet, relaxing adult only caravan park set in 7 acres with 2 onsite fishing lakes.  The pitches are positioned around the lakes, home to lots of wildlife including a family of kingfishers, wild ducks and moorhens.

Grooby’s Pit is well maintained and very peaceful – so much so customers don’t want to leave! A 15 minute drive takes you to the seaside town of Skegness with all its attractions. Another great drive is to follow the coastline to Chapel St Leonards and Mablethorpe. Grooby’s Pit is also ideally positioned to visit Boston, Tattershall Castle, Lincoln, Woodhall Spa, Horncastle or Louth.

All pitches are large, level, gravel hard standing for your car, caravan and awning. They are surrounded by grass and newly planted laurel hedging. Each pitch has its own 16amp bollard and light, as well as a personal tap and grey water drainage. Rock pegs are recommended for awnings. We now have some grass pitches situated around the nursery lake.

Fancy a spot of Glamping?  Perched on the edge of the lake with an exceptional view, sits the Deluxe Camping Pod complete with full facilities including its own shower room, split level decking for fishing & tucked away to the side a private hot tub. Ideally positioned to take in the morning sunrise or sit & watch the wildlife on offer. 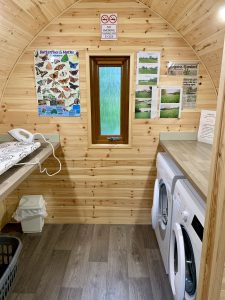 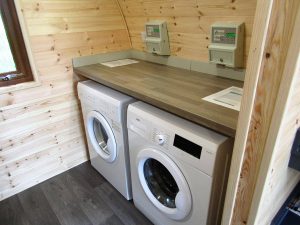 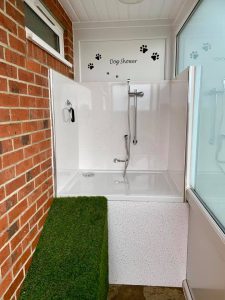 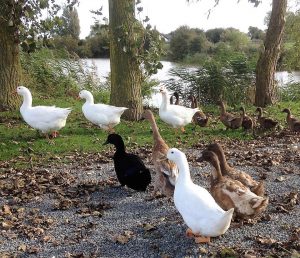 Our Facilities on Park

Grooby’s Pit has two heated toilet/shower blocks (both with designated ladies and mens). All with high quality fittings, fast hand dryers and hair dryers in the ladies. An inside pot washing area is also supplied. Everything is free to use, open 24 hours a day and cleaned daily to an impeccable standard.

Also on site is our Laundrette and Information pod, with washing machine, tumble dryer & ironing station. Lots of local information & menus. Help yourself to books & magazines to keep. DVD’s to borrow or check your emails as there is free wi fi inside.

Well behaved dogs are welcome free of charge, but we do insist they are kept on a short lead at all times unless they are inside our dog exercise area where they can run free, safe & secure, one customer at a time. There is also a dedicated dog shower with warm water to keep our for legged guests clean.

Grooby’s Pit has pet chickens, ducks & geese that free range around the site (locked away safely at night). The chickens are so friendly & will pop around to say “hello” looking for any tit bits on offer. Eggs are available to buy. 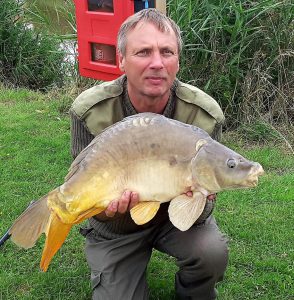 The main fishing lake, has an excellent reputation for fishing, due its variety of fish. Especially for the Bream. As well as the choice of individual, private, fishing pegs on the main lake there is also a new grassed peninsular, ideal for customers that don’t do well with steps or for couples that want to fish together. The lake has also been restocked and is full of Bream, Carp, Perch, Rudd, Tench, Roach, Barbel, Pike, Skimmers & even Eels.

The Nursery lake is stocked with Carp, Tench & Golden Orfe and is easy fishing for beginners.

A great place for Bird watchers, besides the wild ducks, moorhens, geese, king fishers and swans. Watch out for the owls, bird of prey and the parakeets (escapees from the local parrot zoo). Not to forget the wild deer that wander in from time to time as Grooby’s Pit is surrounded by flat countryside, ideal for cyclists & walkers.

Perched on the edge of the lake with an exceptional view, sits our Deluxe Camping Pod with a split level deck.

Exit the lodge by the double doors straight out onto a part covered decked area with wood burner, table & chairs, a double rocker chair and outside lights . Steps down to a lower decked area for private fishing or further seating. Tucked away to the side is the private hot tub. Ideally positioned to take in the morning sunrise or sit & watch the wildlife on offer. 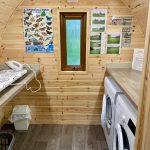 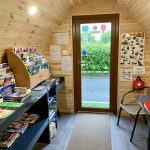 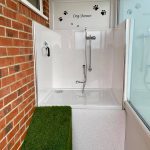 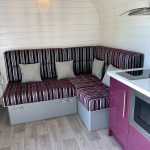 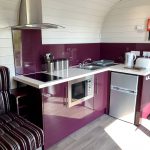 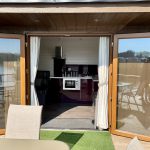 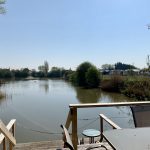 We have two pubs in walking distance from us. The Barkham Arms & The Holly Tree.
Also in walking distance is Quinceys Pumping Station on the Steeping River. The station was built in 1938 but was replaced with a new electric station by the former Skegness District Internal Drainage Board in the mid 1970s. The diesel engines were retained by the Board on standby but by the early 1990s the station was in need of considerable work with only one pump in working order. Fortunately, a small but dedicated group of volunteers offered to renovate the pumps under the guidance of the late Mr Dennis Quincey. This restoration began in 1994 and continues with the volunteers meeting on the fourth Sunday of every month to undertake maintenance of the engines and the station. When open the flag is flying and customers can enter free of charge to see the pumps in operation.
More pubs & local amenities can be found 2 miles away in Wainfleet. Including a Co-op, post office, butchers, pet store, petrol station, fish & chip shops, hairdressers and take-aways.

Batemans Brewery in Wainfleet is 2 miles from us.
They have a visitor centre and offer a fascinating brewery tour & tastings. They have the biggest collection of bottled beers in the country with good food & drink to enjoy. A brewery tour also involves a visit into the brewery artifacts room in order to browse through the original documents dating back to the 1800s. Those on the tour can also go into the upstairs of the windmill.

Lincolnshire Aviation Heritage Centre in East Kirkby is 8.3 miles from us.
The Lincolnshire Aviation Heritage Centre is a family run museum and was set up over 20 years ago. It is now widely seen as a living memorial to the 55,500 men of Bomber Command who lost their lives during WW2. It holds one of the rarest aircraft, an Avro Lancaster Bomber, in its collection along with many wartime vehicles including a Ford WOT1 Crew Bus, the only one of its kind known in existence.

We are approximately 7 Miles from the seaside town of Skegness with attractions that include:

The Village Church Farm Skegness
The Village Church Farm, formerly known as Church Farm Museum, is an open-air museum of local and agricultural history near Skegness. There are a number of traditional indigenous buildings, including a thatched “mud and stud” cottage, moved from the nearby village of Withern, the original 18th-century farmhouse, and a 19th-century stable block and cowshed. The museum holds exhibitions of 19th and 20th century farm implements and machinery, and displays about traditional breeds such as the Red Poll cattle, and the Longwool Sheep, although there are no animals on site.

Gibraltor Point National Nature Reserve Skegness
Gibraltar Point is a dynamic stretch of unspoilt coastline running southwards from the edge of Skegness to the mouth of the Wash. Known for its impressive views and sheer scale and diversity of wildlife, Gibraltar Point is worth visiting in different seasons to fully appreciate its landscape.

Natureland Seal Sanctuary
Natureland is well known for rescuing and rehabilitating orphaned and injured seals that become stranded on Lincolnshire beaches.Visitors can see the various stages of their rehabilitation and hear about the rescue work at feeding times. There are lots more beautiful and amazing animals.Watch the amusing antics of the penguins, be amazed by the tropical butterflies, squirm at the reptiles and creepy crawlies, feed the goats in the Pets Corner and marvel at the beautiful tropical fish in the Aquarium.

The Embassy Theatre in Skegness has lots of different acts so don’t forget to check out who will be on during your stay.

The Raceway Stadium Skegness is a fun place to be for all members of the family something for all age groups, just two miles inland from Ingoldmells, and easy to get to from Skegness and surrounding areas, featuring a ¼ mile tarmac race track, its unique wide tight bends and short straights offer the best Banger and Stock Car racing in the country. Monster Truck Car Crushing, Car and Motorbike Stunts plus our famous Caravan Bangers.

Also in Skegness besides the beach is Skegness Aquarium together with amusement arcades, shops, restaurants pubs & clubs.

Gunby Hall & Gardens are 3.9 miles away.
Gunby Hall is a country house in Gunby, near Spilsby. Reached by a half mile long private drive. The Estate comprises the 42-room Gunby Hall, listed Grade I, a clock-tower listed Grade II* and a carriage house and stable block which are listed Grade II. In 1944 the trustees of the Gunby Hall Estate, Lady Montgomery-Massingberd, Major Norman Leith-Hay-Clarke and Field Marshal Sir Archibald Montgomery-Massingberd, gave the house to the National Trust together with its contents and some 1,500 acres of land. Gunby Hall is currently leased from the National Trust with a requirement to open the Hall’s State Rooms and Gardens to the public.

Dobsons Windmill & Heritage Centre Burgh Le Marsh is 3.4 miles from us.
A unique experience as you step back in time. The mill is very much a heritage piece as you might expect of a Grade 1 listed building. While some historians think the mill was built around 1813, a map from 1810 shows a windmill already on the site. The current mill tower was most likely built in 1844.What is certain is that the mill was worked as a commercial concern by the last owners, Dobsons, until the 1960s. It was then purchased for preservation by the County Council and has been run since by groups of volunteers.

Either click the map below for directions to Grooby’s Pit Caravan Park.

If arriving via Boston, please use the A52 towards Skegness turning Left onto the B1195 at Wainfleet St Mary, following the road through to Thorpe St Peter. After passing the church on your right hand side, turn Left to Thorpe Culvert railway station. Go over the crossing & Turn Right. We are on the left hand side. The back roads from Boston using a sat nav are quicker but are not suitable for caravans or some cars (very bumpy).