Overbrook Caravan Park is a friendly, adult only caravan park on the outskirts of the picture-postcard village of Thornton-le-Dale in the North Yorkshire Moors National Park.
It is ideal for touring the Vale of Pickering, Newton Dale, Ryedale and the beautiful Yorkshire coastline from Scarborough to Whitby.
You will soon discover nothing is too much trouble for resident owners Natalie and Darren, and why so many of their guests return to Overbrook.

Each year Overbrook choose a several charities to fund raise for, this year they decided on ‘Help For Heroes’ and ‘Tommys’. Fundraising for HTH is primarily achieved through the sale of badges and wrist bands and we’re pleased to say our guests are always extremely supportive of our efforts. When it came to raising funds for ‘Tommys’, owners Darren & Natalie decided they wanted to raise the bar that little higher and raise as much money as possible for this amazing charity.

It’s a charity particularly close to their hearts having friends who sadly had to go through the toughest of times after having a child born sleeping.  Darren & Natalie’s  were reminded of this when, George & Nancy their twins were born nearly 6 weeks prematurely, a very scary time for them both.
After a lot of thought Natalie decided she wanted to take up the challenge too and take part in her very first half marathon, also to raise funds for ‘Tommys’! ‘This is someone who 2 years ago would of been filled with dread at the sheer thought of running even 2 miles, well done Natalie’ !!!!! 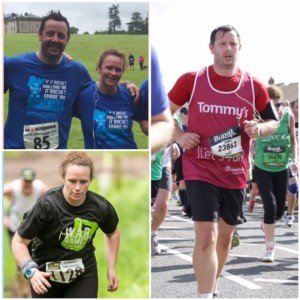 Darren also took part in 2014’s Great North Run, and again ran on behalf of ‘Tommys’ with some midwife friends. He decided he wanted another go to beat his first time of 2 hrs 10 mins. Overbrook guests have been fantastic in supporting their cause and so far have helped them raise an amazing £500 on the way to their initial target of £800!!!!. Anyone wishing to donate can do so by visiting their just-giving page at www.justgiving.com/NS-ELLISDG-ELLIS where any amount is always very much appreciated.
So September 13th will see the Overbrook team pounding the streets of Newcastle with 57,000 other runners including British Olympic athlete Mo Farah before arriving 13.2 miles later on the beach at South Shields in front of thousands of spectators!!!!

What is ‘Tommys’? ‘Tommys’ exists to save babies lives by funding research and providing information on the causes and prevention of miscarriage, premature birth and still birth. Even today 1 in 4 woman lose a child in pregnancy or birth, ‘Tommys’ endless work and research endeavours to improve this.